Every one of us is unique, because we all have different genes and have all been exposed to different environments. This means our individual risk of developing diseases such as cancer or dementia, how ill we become and how we respond to treatment also varies enormously. Combining state-of-the-art cellular models, high-throughput molecular profiling technologies and advanced computational models, researchers at Erasmus Medical Centre, Erasmus University Rotterdam and TU Delft are collaborating on the 5-year Flagship project iCELL to understand the role that both genetics and environment play in disease diversity, and use this knowledge to improve individual treatment and disease prevention at the population level.

“The original idea stems from a brainstorming session about 10 years ago,” remembers Professor Joyce van Meurs, Lead at the Erasmus Medical Centre and the Flagship project’s Main Lead, “but we didn’t have the techniques then that we do now so this ‘Convergence in a Dish’ project is a really exciting opportunity.”

Human disease modelling has recently been revolutionised by the arrival of a technique known as induced Pluripotent Stem Cells or iPS cells, which enables researchers to ‘create’ stem cells. These are undifferentiated cells that have the potential to develop into any type of specialised cell e.g. a nerve cell or a liver cell and by studying stem cells from different donors, researchers can learn more about how disease develops in each individual and how that process varies across the population. Until now, it’s been difficult to obtain stem cells but using the iPSC technique, researchers can create stem cells from tissue donated to Biobanks, for example. “That’s the magic of this process,” explains Dr Roberto Narcisi, part of the Flagship scientific team at the EMC and programme coordinator, “we can take a skin cell, turn it into a stem cell and then turn that stem cell into a brain cell, for example. So you can generate different tissues for each DNA that you want to study.”

The advantage of having these cellular models is that they give researchers the chance to look at the process of disease development at a very early stage. Van Meurs: “You can of course take cells from people who already have a particular disease but then the cells are then at a very late stage in the disease. For example, in my own field, osteoarthritis, you can remove cells from a diseased joint and look at the cartilage cells. However, those cells have been part of a damaged joint for years and what we want to study is how the disease starts to express itself at a much earlier stage. You can’t do that in the body so you need a model system and with iPS cells in combination with single-cell analysis, we can generate a cellular model for each individual and for every type of tissue.” 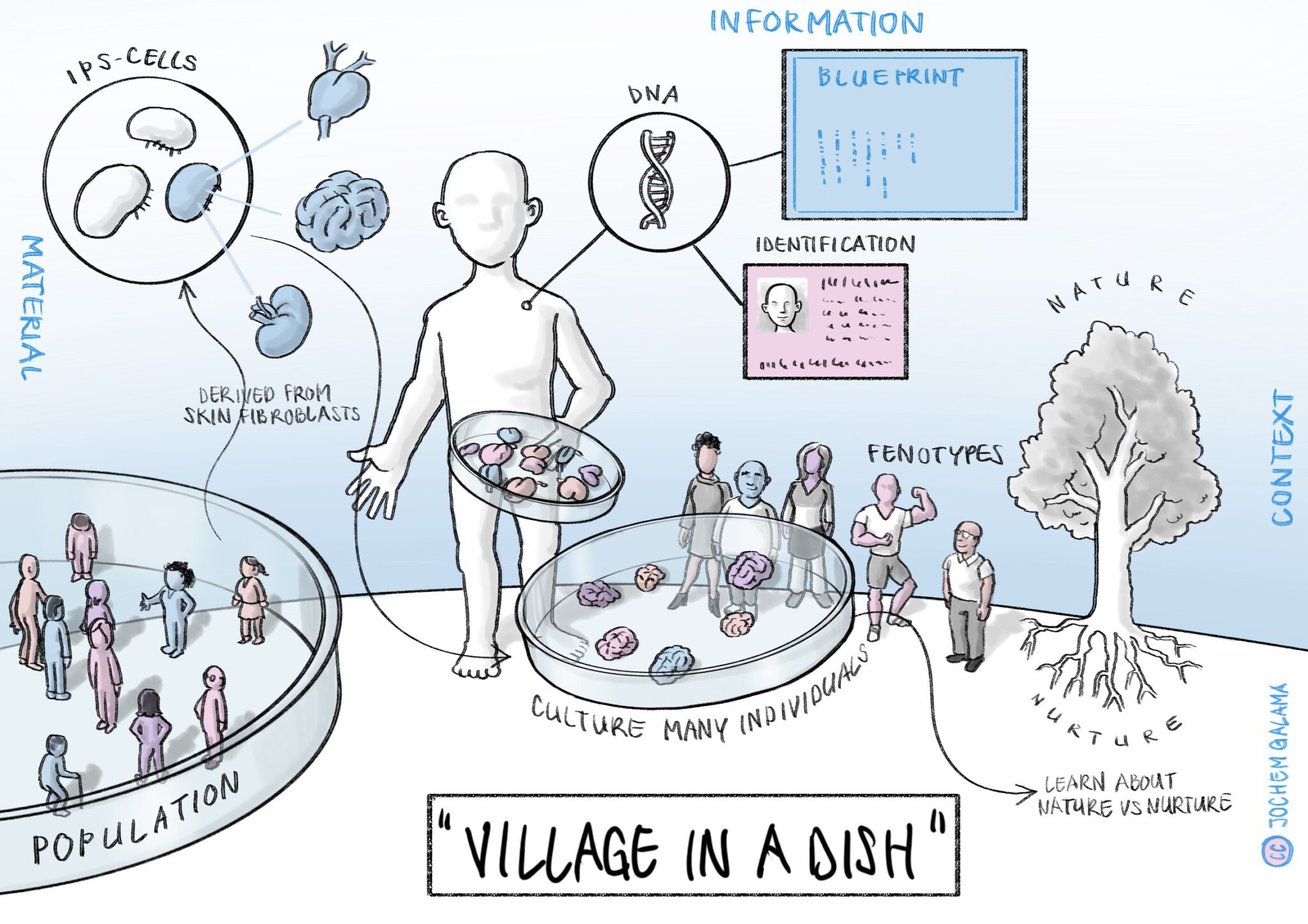 The Flagship project will also involve another state-of-the-art technique called ‘village culturing’, which is a method of culturing many different iPS cells from different donors ‘in one dish’. This process enables large-scale application by providing the large amount of data needed to identify patterns and make accurate comparisons between the cell-lines that go on to develop disease and those that do not. This is where Dr Joana Gonçalves at the Department of Intelligent Systems and Flagship Co-Lead at TU Delft comes in: “Once we have the co-cultured cell lines from different donors, we’ll use molecular profiling technologies to measure different types of gene expression in each cell line. Then we’ll develop computational methods to identify molecular biomarkers that for example, correlate with the potential to develop disease or respond to a treatment. Ultimately the goal is to develop computational models for individualised disease diagnostics and treatment decisions by taking into account the variation across donors.”

Another group at TU Delft will build on a long-running project to create various extracellular microenvironments by mimicking the biophysical and chemical properties of the natural environment of the cells. And a third TU Delft group is working on imaging technologies that will not only keep track of the different cells from each donor, but also measure how each cell reacts to different stimuli. Gonçalves: “We’ll expose cells to DNA damage, for example, to see how well they repair their DNA and how this capacity varies between cells from different donors and genetic background. This is very important because the ability of a cell to repair any damage to its DNA plays an important role in diseases like cancer, osteoarthritis and muscle diseases.”

How can we improve the world?

Leading the team at Erasmus University Rotterdam is clinical epidemiologist and specialist in health technology assessment, Dr Ken Redekop: “My job is to ask ‘How can we improve the world with the technology that’s being developed?’ What kinds of diseases could be treated? Where should we focus on first? Obviously, there are several serious diseases that we all want to treat, so we have to think strategically about things like how many ‘healthy life years’ can be gained. I listen to what the iCELL community has to say and then I want to know why those diseases? Is it because the people with those are so sick or are those diseases so common that we really need to do something? So we identify what potential applications could be targeted first.”

And it’s this multidisciplinary aspect of Convergence that excites and motivates many of the participants. Redekop: “The Flagship project is like a five-year Star Trek mission! We’re different people with different backgrounds working together to communicate in the same language to achieve the same goal, and our mission ‘to explore new worlds’ is not just about the technical challenges but also societal ones.”